Over 500 panelists from the Conference on the Future of Europe were present in the European Parliament hemicycle on December 2nd during a follow-up event. Citizens came from all member States to learn what has been done with their proposals from the four Panels. Their concrete recommendations to Europe were officially handed over last on Europe’s Day last May. Vice-President Dubravka Šuica, Co-Chair of the Conference on the Future of Europe and Commissioner for Democracy and Demography, leading the Commission’s work on deliberative democracy, explains how the Commission has taken action since.

Missions Publiques. The Conference on the Future of Europe has ended. Citizens and stakeholders have been longing for the follow-up event and know how the European Commission (in parallel to the Council and Parliament) will take stock of their recommendations. What is your response to them? How did their recommendations serve a purpose?

Dubravka Suica. The Conference on the Future of Europe gave citizens a greater say about Europe. This was a successful exercise in bringing citizens to the very centre of EU policymaking. We have committed to ensure that they remain there and will continue putting policy questions to citizens’ panels at the European level. This will start already in mid-December. We have not delayed in responding to citizens’ requests. There is no better time than now to improve our Union.

Citizen’s recommendations served us greatly. For example: Some initiatives that were already planned were reassessed in the light of the Conference to better respond to the citizens’ demands, such as the “New Better Internet for Kids” Strategy(1).

The Commission reacted quickly. A month after the closing event, the Commission came forward with a Communication “Putting vision into concrete action” (2)[of 17 June 2022] which set out what was needed to bring the Conference proposals to life from the aspect of the European Commission. In September, President von der Leyen announced the first new Commission initiatives responding to the Conference’s conclusions in her State of the Union address(3).

On 18 October, the Commission adopted its Work Programme for 2023, which carries a strong Conference follow-up dimension as well. The initiatives cover subjects ranging from mental health to animal welfare, and from critical raw materials to financial services.

These initiatives directly or indirectly follow up on the proposals of the Conference and will contribute to the future that citizens and other participants such as regional, local and national elected representatives envisaged together. This applies to 4 out of 5 of the new Commission initiatives announced for 2023.

Building on the success of the Conference, the Commission is also embedding participatory practices in its policymaking. From now on, our toolbox contains citizens’ panels as permanent feature of policymaking ahead of certain key initiatives. The first three new generation panels will deliberate on food waste, learning mobility and virtual worlds.

But the Commission’s follow-up is not only limited to delivering new proposals. The Conference has also contributed to updating our democratic institutions. We thank our citizens for that.

Missions Publiques. Can you give concrete examples of recommendations made by citizens that you personally value? Why?

Dubravka Suica. Since I’m a teacher, the best proposal we got from this conference was that people asked for about more education from Europe. Far too few people of all ages know how we work, what the difference is between our institutions and what Europe does for them concretely, how it supports them and provides opportunities in their daily lives. In my view, the call to include education about the European Union in our Member States school curricula from very early on, even kindergarten, is an excellent and extremely necessary recommendation. Especially if we want more Europe, not less.

Vice President of the European Commission for Demography and Democracy

Missions Publiques. More globally, one year after the launch of the CoFoE, what do you think is the impact of such an unprecedented process in EU decision-making?

Dubravka Suica. The root causes of some of the challenges faced in democracies – for example voter apathy, or indeed an embrace of populism, disaffection with public institutions or governments are not only present in Europe. We see worldwide setbacks to democracy, to the universality of rights. We find ourselves in conflict with autocracies that flout the very values that democratic societies are built on.

Our societies are undergoing deep transitions: climate change and the ever-increasing pervasiveness of digital technologies are underpinned by profound demographic shifts. These changes have been accelerated by the pandemic and by the war. The consequences of this perfect storm for citizens would have been much worse, had the European Union not showed that by building on the unity and solidarity of European citizens, we can act resolutely and find common solutions.

Our representative democracy works well but it is not without fault. I see how people feel left behind and are feeling unhappy. I feel we are at a crucial juncture, both in Europe and globally. The Russia’s war against Ukraine has highlighted this all the more. Therefore, we must intensify our efforts to listen to citizens voices, to keep them engaged and to deliver on their requests and our promises.

Citizens themselves are improving democracy, directly and indirectly, including through representative, participative and deliberative democracy. They have helped update our European institutions and thanks to them, deliberative democracy will now become part of how we as the EU make decisions. This is a first. 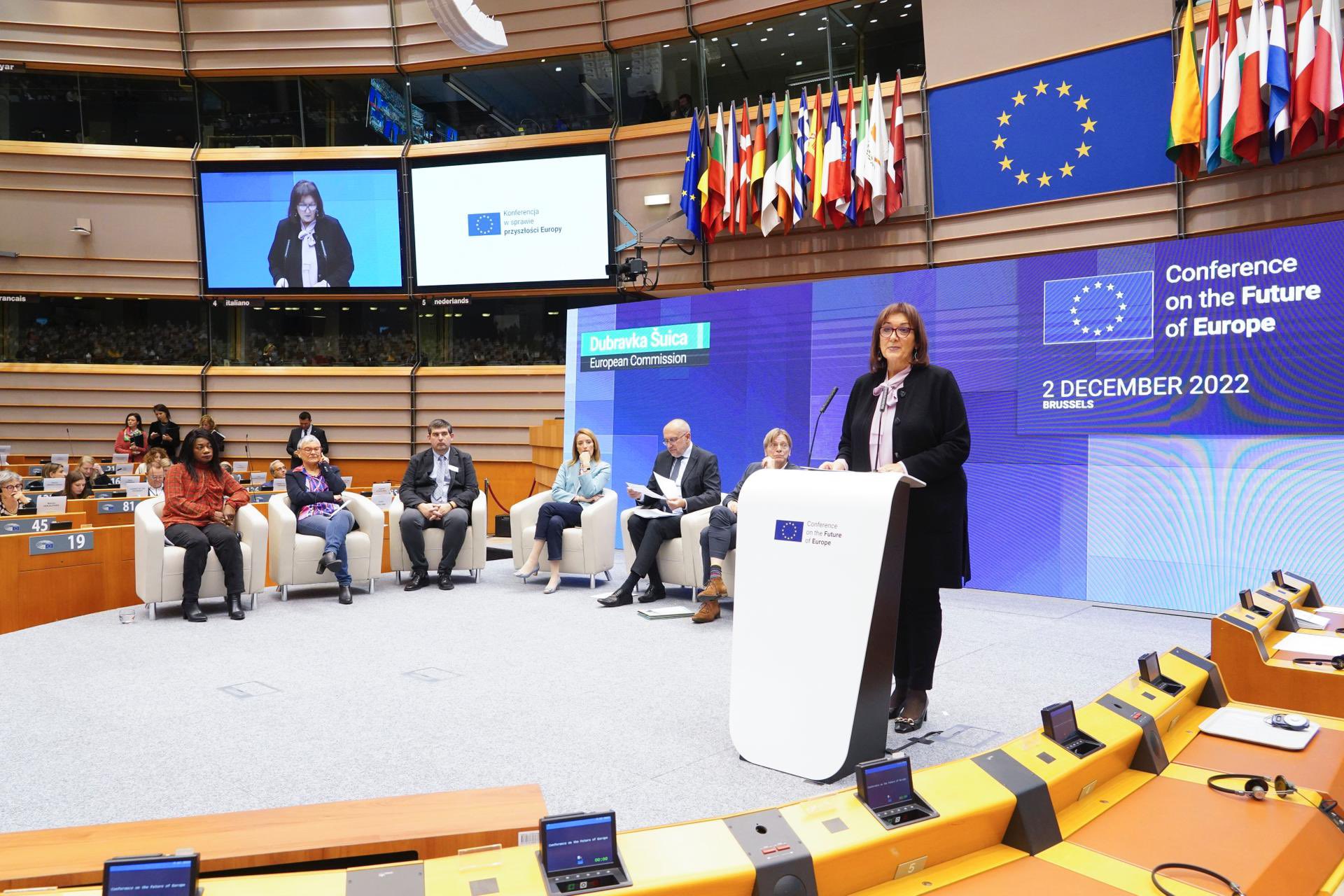 Dubravka Suica. This panel will deliberate many important aspects that our dear to citizens. It deals with mobility which is one of our fundamental freedoms in the EU. It is about learning and education, which we all agree needs to be in tune with the needs of our time. And it deals with the adaptability of skills just as we are about to start 2023, which will be the European year of Skills. So, it is a very topical subject which I am sure will provide much food for thought for the panel, who in turn will certainly provide us with valuable input to the Commission’s policy-making.

(1) The Commission has adopted a new European strategy for a Better Internet for Kids (BIK+), to improve age-appropriate digital services and to ensure that every child is protected, empowered and respected online. More info here: https://digital-strategy.ec.europa.eu/en/policies/strategy-better-internet-kids
(2) On Friday 17 June 2022, the European Commission adopted the communication titled “Conference on the Future of Europe – Putting vision into concrete action”, outlining how it can follow up on the outcomes of the Conference on the Future of Europe. https://ec.europa.eu/info/sites/default/files/communication_1.pdf
(3) https://ec.europa.eu/info/strategy/strategic-planning/state-union-addresses_fr
ON THE SAME SUBJECT