“We want to bring politics to people, not people to politics”

As the last plenary of the Conference on the future of Europe’s starts soon, it is high time to ask how citizens’ deliberations can become part of the EU’s future participation toolbox. In response to the report of the Conference Observatory High-level Advisory Group, we would like to provide a response regarding one of the four options provided by the Observatory on how to incorporate new participatory elements in the EU’s democratic process after the Conference ends. The Observatory’ proposals is as following: ‘Big tent’ fora on the EU’s strategic priorities” (1).

This intriguing scheme goes by the following: a “big tent’ fora, where randomly selected citizens and elected representatives from different policy levels (i.e. EU to local) gather every five years to discuss the Union’s strategic agenda. Such fora could involve 500 to 600 members made up of citizens and a cross-section of elected representatives at all levels across Europe.”

This is where our itinerant venue for citizen participation comes in. Missions Publiques, alongside architect Luc Schuiten, set about designing such a “big tent fora” for proper inclusive and horizontal deliberation.

Its triangular prism emerged naturally as it is emblematic and meaningful. Our space is made up of several concentric circles evoking the sound waves that ripple outwards from a central emitter. As inspiration, around the circle we have placed illustrations of those places that still serve as models of participatory democracy across the world.

First, the majestic palaver tree, with its impressive span that provides cool shade, is a traditional gathering place in African rural regions. Every aspect of village life thus comes under scrutiny in a genuine spirit of collective management. The cohesion of the village community is ensured, and peace and understanding between village inhabitants, and between neighboring villages, is maintained. Then, the debating assemblies held in Navajo communities are central to the political decision-making. Hogans, the traditional dwellings, housed all kinds of social activity including rites, ceremonies, and assemblies. Hogans are traditionally circular in shape, reflecting the Navajo representation of the world and their belief in the creation of the first hogan for the First Man and the First Woman. The hogans are considered as pioneering for their high energy efficiency.

Being aware of these different vernacular decision-making venues, which share many similarities despite being scattered across the planet, can only increase the sense of the debates’ relevance. 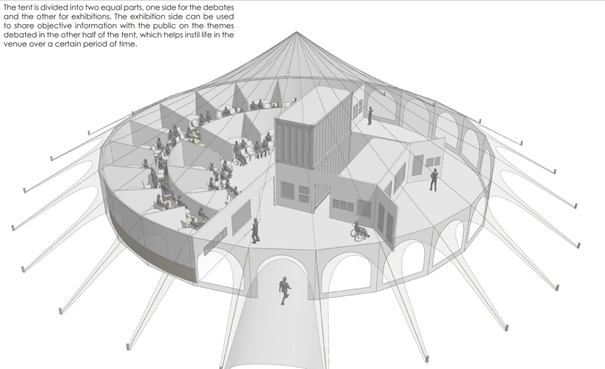 The discussion tables allow for six people and a facilitator, and form two concentric semicircles that enable communication between the groups and the speakers on the central stage. The partition walls of the alcoves are soundproofed so that each table can hold its discussion without being disturbed by the neighboring groups. The visuals on the alcove walls are printed on fabric made from polyester and plastics recovered from the oceans. Their construction thus plays a positive environmental role even before they are put to use. 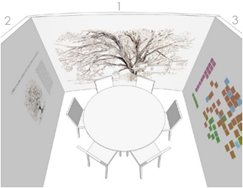 The facilitators report on each group’s discussions from the front of the alcoves or from the centre of the circle. The semicircle arrangement means everyone can see and hear each other by simply turning their seats around. This enables plenary sessions to work on disagreements and establish a shared position for all the groups, facilitated by a team in the centre of the layout. Alternatively, representatives from each group can be brought together on the central stage to seek a common position or to put forth individuals’ arguments.

The Citizens’ Panels of the CoFoE have shown us how far away the architecture of EU institutions are from participatory and deliberative venues (discussion rooms in the form of a U with vertical design for example) to enable and facilitate citizen dialogue, our itinerant venue can be used by municipalities, local authorities, youth and cultural centres, European or regional bodies, and by any group keen to set up a permanent or temporary venue dedicated to citizen participation. It creates optimal conditions for dialogue and is easily dismantled and transported. It is itinerant to go out and meet citizens where they are…). We want to bring politics to people, not people to politics. Up to 17 citizen assemblies can be incorporated into the venue, simultaneously. 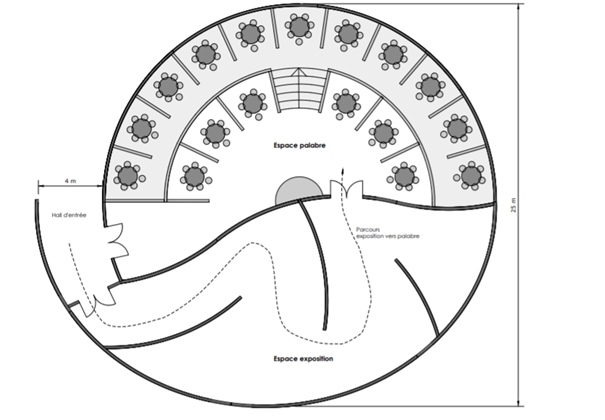 To carry what we call the “energy of the collective”, the venue had to be appealing in its aesthetics, it had to allow for discussion formats from small to large groups, and it had to be both a place for dialogue and a place for exhibitions. The exhibition part aims at informing the public objectively about the themes debated in the other half of the tent, to make this meeting space live over a long time. The semi-circular layout allows everyone to see and hear each other after moving from their seats, for moments of exchange in plenary, to work out disagreements or build common positions for all groups. 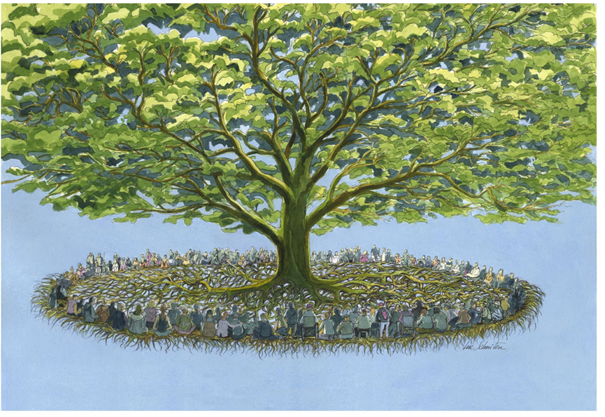 The facilitators report on each group’s discussions from the front of the alcoves or from the centre of the circle. The semicircle arrangement means everyone can see and hear each other by simply turning their seats around. This enables plenary sessions to work on disagreements and establish a shared position for all the groups, facilitated by a team in the centre of the layout. Alternatively, representatives from each group can be brought together on the central stage to seek a common position or to put forth individuals’ arguments.

A simplified version of the project was designed to be integrated into existing structures such as a barn, a gymnasium or a festival hall. The number of cells can be adapted to the size of the place and the project. In its complete version, you can organize a debate with 100 citizens (with 17 cells). 3, 4 or 10 cells can be acquired and inserted in an existing place (like the two cells, which are exposed in our Brussels office, rue d’Arlon).

Our project is based on the idea of a nomadic society: the structure can be easily dismantled and transported. The tent itself, as well as installation and staging, can be stored in 2 containers.

Read more about our itinerant venue here and contact us for more information.

(1) Read the full Observatory report here: https://conference-observatory.eu/wp-content/uploads/2022/03/High_Level_Advisory_Group_Report.pdf
On the same topic
Conference on the Future of Europe: 5 take-aways from the follow-up event Read more
"We have made deliberative democracy an integral part of our decision-making process" Read more
Conference on the Future of Europe: could it be that citizens moved the European Union forward? Read more
Share this