Towards the plenary of the Conference on the Future of Europe!

The Conference on the Future of Europe, which will end in the spring of 2022, is an exercise in participatory democracy that is extraordinary in terms of its size, its ambition and its innovative political character. Its objective is to give the citizens of the 27 Member States the opportunity to express what they expect from the European Union. So, where do we stand? The last of the Panels ended in Dublin Castle, where citizens adopted a total of 48 recommendations that can now be forwarded to the March plenary in the European Parliament in Strasbourg for follow-up by the European institutions. But once the recommendations are adopted, what role do citizens play? The floor is given to two young ambassadors, Aoife and Philip, who will soon meet in the Strasbourg hemicycle to make the voice of their working groups heard. 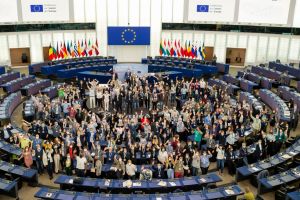 Often, and rightly so, participants at the end of participatory processes ask: what now? Indeed, once the final recommendations are adopted, how to convert the citizens’ agenda into a political process? How far can we go to ensure that the citizens’ recommendations are taken into account by the decision-makers? By giving 20 volunteer citizens per panel a final mission: to go to the plenary, the innovative cornerstone of the whole process.

Selected on a voluntary basis by drawing lots, these twenty citizens were appointed “ambassadors”.  They represent their panel in plenary, becoming the real link between the two entities. Their role is essential to generate the political process, as their voice is as valuable as that of other stakeholders. How do they do this? They are on an equal footing with the other components of the plenary: 108 representatives of the European Parliament, 54 of the Council, three of the European Commission, 108 of the national parliaments, 108 citizens, 80 of the European citizens’ panels, 27 of the national citizens’ panels or conference events (one per Member State), and the president of the European Youth Forum.

The Plenary is a democratic innovation because of its hybrid format, its time-limited focus and its multi-level process. Composed of more than 400 people and taking place in the hemicycle of the European Parliament, its ambition is to debate and discuss the substance of the National and European Panels, taking into account the contributions collected on the multilingual digital platform, according to the themes under consideration. On the basis of a consensus, the plenary will present its proposals to the executive board of the Conference, which will then draft and publish the conclusions of the plenary.

“In the plenary session, I will have to defend my group’s idea of harmonizing education from the primary level in the member states.”

A student in linguistics and law, this young Irish woman of 23 years old wants to become a lawyer specialized in Gaelic, the first official language of the Republic of Ireland. It is in her country that the last session of the Citizens’ Panel on “A stronger economy, social justice and employment / Youth, sport, culture and education / Digital transformation” takes place. But before going into law, she was drawn (on a voluntary basis) to be a citizen ambassador at the plenary of the Conference on the Future of Europe. She will speak on behalf of her subgroup and advocate for its recommendations on education.  “For us, the most important thing is the harmonization of education across the member states, we want a certified minimum standard for primary education in the EU. For her, who was lucky enough to have a high quality school education, “it is important that the next generations have just as good an educational experience as I did, regardless of their country and standard of living.

For her, Europeans are not so different from each other. This Conference on the future of Europe “proves it to us, I have the impression that we are all on the same line concerning the great subjects of cooperation. The citizens are taking the experience very seriously, and that is encouraging for the future!

This “continuation” is the plenary of the Conference which awaits it in the weeks to come. Aiofe and the other ambassadors will face the European deputies. “I decided to submit my application to become an ambassador at the very last minute because I knew I would have to commit myself fully. In the end, it was the best decision I made because I was able to talk to the MEPs and see how seriously they take our issues. The most incredible moment for me was to see the MEPs stand up and ask their questions directly to the citizens. I hope that the plenary of our session will give way to an equally incredible debate!”

“In the plenary session, I will have to defend my group’s idea of harmonizing education from the primary level in the member states.”

“I want this first try to become a norm, so I want to help make things better.”

Philip is a Polish student in industrial design, he is 20 years old “but everyone gives him 16”. His biggest surprise in joining the Citizen Panels? “We have similar ideas, similar dreams and visions to define a better future for Europe.” For example? “Better cooperation between member states,” which seems to be a desire of all of us, or at least of those in his working group. When he arrived at the very first session, “it was like a dream that I didn’t realize.” Six months later, Philip is proactive in his role as an ambassador, pointing out “little problems that could be adjusted if we were to do a conference like this again. Because it’s the first time it’s happened, obviously some things can be improved, it’s still not ideal. I take it to heart to give constructive feedback to the organizational teams to improve the overall process; I want this incredible first try to become a normality, so I want to help make things better.

He compares himself to his fellow ambassadors who sometimes “study politics or law,” “I just come from an ‘art school. Despite this, these last six months of working on the road or from home for the online session will be “probably the most exciting six months I will experience for the next ten years of my life.

To get to know other citizens of the Conference on the Future of Europe, read this article.

“I want this first try to become a norm, so I want to help make things better.”